If you are looking for some Kentucky Oaks royalty there may be an Empress coming out of New Orleans. Serengeti Empress enjoyed an impressive front-running score in the February 16 Rachel Alexandra Stakes at the Fair Grounds and placed herself atop the Oaks leaderboard. Picking up her first win as a three-year old, this fleet footed filly now has four wins in six lifetime starts.

“She had a great two year old season,” says trainer Tom Amoss. “Now Serengeti Empress has come back as a three-year old and shown us she is a bigger, stronger, version of herself.”

With one of her wins as a two-year old being a 19 ½ length victory over the Churchill Downs dirt in the mile and a sixteenth Pochahontas Stakes last September, this daughter of Alternation obviously likes Louisville. Of course there is more to being queen of the Kentucky Oaks than winning a February race at the Fair Grounds, but right now this Empress is looking rather royal. Her likely next start will be in the Fair Grounds Oaks on March 23. (photo by Hodges) 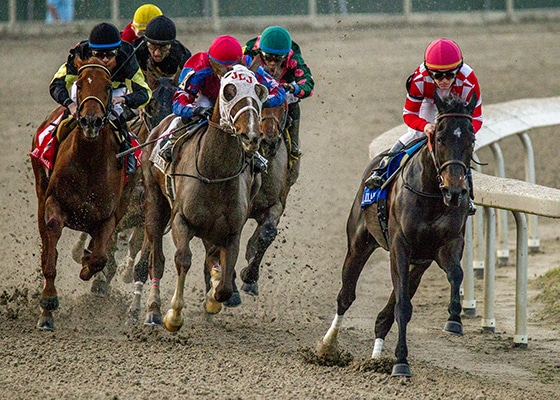 2/16/2019 – Jockey James Graham pilos Serengeti Empress into the stretch, then pulls away from the pack to win the 39th running of the Rachel Alexandra Stakes at Fair Grounds. Hodges Photography / Britt Benson.