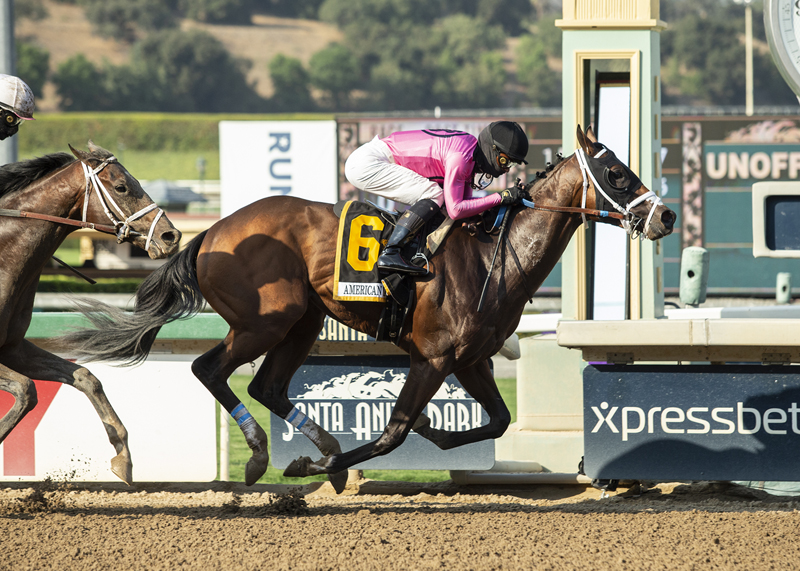 If a gunslinger is going to last, he better have some loaded weapons. When the California Kid heads to Lone Star Park on Memorial Day rest assured, he is bringing an arsenal.

Peter Miller has been one of the top Thoroughbred trainers on the West Coast for quite some time. Recent years has seen his barn branch out to other areas of the country. Having won graded stakes races at Oaklawn Park, Keeneland, Churchill Downs, and Belmont Park, this golden state based sharpshooter is not afraid of a showdown. In fact, he relishes the opportunity to go to someone else’s house and compete.

With all that in mind, what better place to sling guns than the great state of Texas? Located in Grand Prairie, Lone Star Park will feature an outstanding Memorial Day card. Five stakes races highlight a showcase day. Miller will be gunning for wins in the last four races of the day. Let’s take a peak at what he’s packing.

The Chamberlain Bridge is the eighth race and contested at 5 furlongs on the turf. A real grass sprint guru, Miller sends out a Colt .45 in Texas Wedge. Aptly named for this appearance, this son of Colonel John will be making just his second start of the year and has not won since January of 2020. He has Joel Rosario in the irons and anytime you combine Miller, Rosario and turf sprint it can be deadly to the opposition.

The Texas Derby is the ninth race on the card and Miller has a Smith and Wesson in Get Her Number. This mile and a sixteenth run over the Texas dirt is loaded with talented three year olds. Miller had decided to skip the Triple Crown races with this son of Dialed In in the interest of long term development. With a strong closing kick and Florent Geroux aboard, he might just be the Number here.

Next on the card is the Ouija Board Distaff Stakes. Contested at one mile on the turf for fillies and mares at three and up, Miller hopes to pick’em off with Laura’s Light. A rifle of a runner, this daughter of Constitution has four lifetime stakes wins to her credit, but is seeking her first one outside of the state of California. Geroux also gets a leg up here and has proven to be a great grass pilot in the past.

Maybe saving the best for last, Miller brings out the big gun for the day’s final race. The Steve Sexton Mile Stakes is also full of quality competition and it will take some marksmanship to hit the target here. C Z Rocket has been perhaps the hottest horse in the Miller barn of late. This Gatlin Gun has reeled off two Stakes wins in a row and seven of his last eight trips to the track have wound up in the winner’s circle. Again Florent Geroux gets the call in an effort to complete the day with a “W”.

“We have brought a good group of horses to Texas and look forward to competing”, says Miller. “We just need some racing luck.”

First post time at Lone Star is 2:20 central and Miller time hopes to begin in race 8 at 6:01 central.